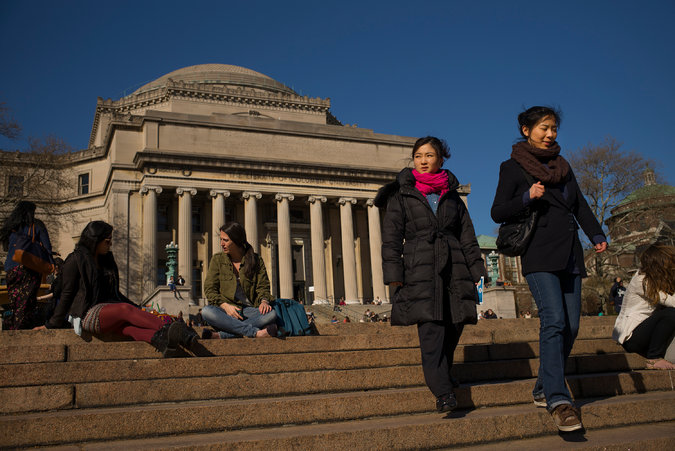 Students filed with the Department of Education’s Office of Civil Rights against Columbia University. Credit Robert Caplin for The New York Times

Pressure on Columbia University to overhaul its approach to sexual assault and harassment reached a new pitch on Thursday, when a group of students filed complaints with the federal government, charging systematic mishandling of assault claims and mistreatment of victims.

Twenty-three students signed on to three separate complaints, each alleging violations of a different federal law, against Columbia and the affiliated Barnard College, which were filed with the Department of Education’s Office of Civil Rights. Such complaints have become more common in the last three years, since the department adopted a stricter view of colleges’ legal obligations, and warned that many of them were in violation.

Among other allegations, the Columbia students say administrators tell those who file assault claims that they must not discuss their cases outside the confines of the campus disciplinary process, though similar practices at other schools have run afoul of federal regulators, and victim advocates call them blatantly illegal.

The students also contend that campus counseling services pressure students not to report sexual assault or harassment, that disciplinary proceedings are handled by people ill-trained for the job, and that accusers are given less leeway than are the accused.

Zoe Ridolfi-Starr, a Columbia junior, is among those who filed the complaint.

“Perpetrators are allowed to reschedule the hearing multiple, multiple times, and survivors are not,” she said, “so we’ve seen cases where perpetrators who delay so long that survivors are forced to stay over the summer for a hearing and pay for housing.”

The students described the complaints but refused to release copies, in order to shield the people named in them; the government does not make such complaints public. The Office of Civil Rights will decide whether to investigate the complaints. Such investigations are often resolved by the school agreeing to change its policies and procedures.

Columbia pledged early this year to overhaul its handling of sexual misconduct, and the university said on Thursday that reform efforts were still underway. But it said it had not seen the federal complaints and could not comment on them.

Students found to have committed sexual assault are rarely expelled, according to those who filed the complaint. Instead, the men receive punishments like a semester’s suspension — far less than they might face in the courts — and return to campus, where their victims might have to face them. (Colleges are not required to notify law enforcement, but are required to tell accusers that they have the right to do so.)

Camila Quarta, a Columbia sophomore who is also a complainant, said she moved off campus in part to lower her chances of seeing the student who assaulted her in her first semester at college. She said the man admitted to the assault in a disciplinary hearing, and was forced to leave for a semester — a penalty she considers inadequate.

“Each time I see him, it’s really hard, emotionally, and just walking around school, there’s this total paranoia that I’m going to run into him,” she said.

Previous college complaints have accused schools of violating the Clery Act, a federal law requiring public disclosure of campus crime statistics, and the Higher Education Act, and the Columbia students filed complaints under both. But their strategy is unusual, in that they also filed under the Americans With Disabilities Act, based on treatment of assault survivors with emotional trauma.

For months, students have mounted a successful campaign to draw attention to sexual assault at Columbia, and the university’s response to it.

Last fall, students started a petition demanding that the university make more information public about sexual assaults and how cases are resolved. In February, a student magazine published a highly critical account of the university’s handling of 10 sexual assault cases. A pair of town-hall-style meetings held in March to discuss sexual misconduct practices drew significant attention on campus, as did a protest this month.

A version of this article appears in print on April 25, 2014, on page A16 of the New York edition with the headline: Students File Complaints on Assaults at Columbia.